For magnetizing this beast, I went with much larger magnets than the Reaver.

So far, I’ve purchased 3/4″ diameter by 3/8″ thick neodymium magnets. These puppies have a pull force of around 24 pounds when it’s magnet to magnet.

Here I’m using a 3/4″ Forstner bit to drill the hole for the lower magnet. 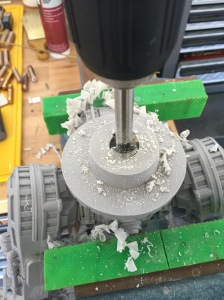 After the main hole is drilled, drill a few holes for the excess JBWeld epoxy to squirt out through. This means you can coat the hole liberally with JBWeld for good coverage, and then push down the magnet until it’s flush, and an excess JBWeld will push out through the tiny holes. 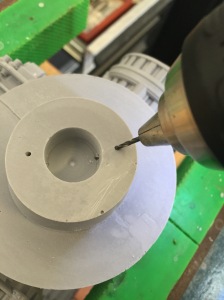 I also drilled through the top plate (bottom of the torso). It’s not 3/8″ thick, so I ended up drilling clean through (not pictured).

Here you can see the fully glued in leg/hip magnet

And the fully glued in torso magnet. 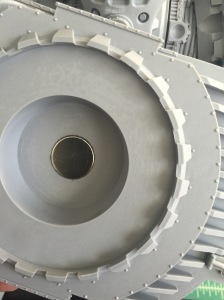 Because the torso plate was thinner than the magnet itself, I dumped quite a bit of JBWeld on top of the magnet to create plenty of support for the torso magnet so it doesn’t pull out when assembling/disassembling the torso from the legs. The fun thing about JBWeld is that it’s metallic & ferrous, so the magnet actually pulls the JBWeld towards it! I just kept adding JBWeld until it created a nice thick ‘cap’ around the top of the magnet. 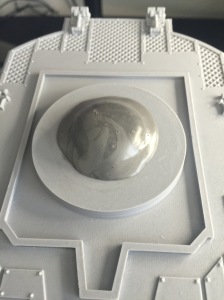 So far (about a week, and probably 100 torso/leg attaches and detaches, both magnets are still 100% secure… so I don’t anticipate a risk of the magnets coming loose from the resin due to the strong 24 pound pull force.

This entry was posted on October 3, 2015 by justinhardin. It was filed under Legio Titanicus, Modeling & Painting, Warhammer 40K .