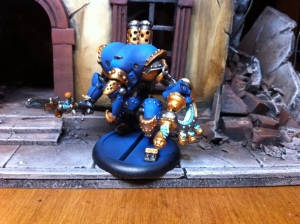 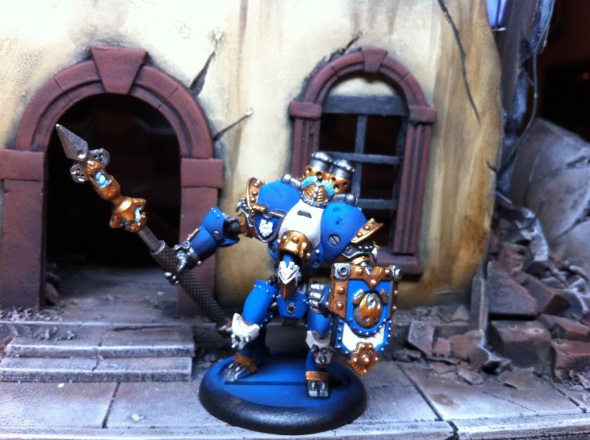 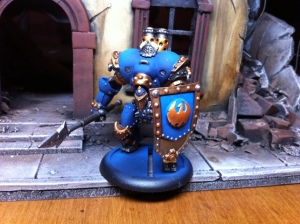 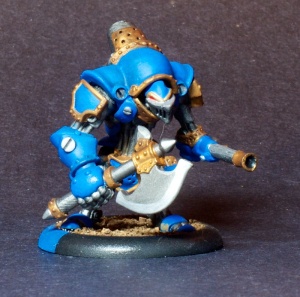 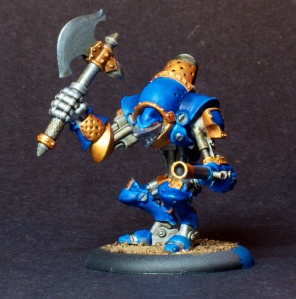 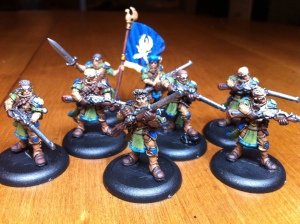 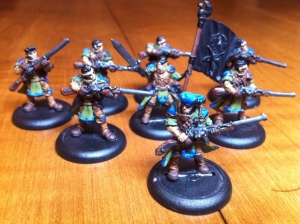 This unit is taking forever. Of course, it is the business week of the entire year at work, so it might be that I’m only able to sneak in an hour painting here and there. I suck at wood grain… so hard to get the micro thin lines, even with a tiny brush. If the point is to sharp and the line is too thin, no paint wicks off the brush or the line is to faint. If I water down the paint to less paint so the tip is ‘sharper’ (no mini paint blob at all) the line is too faint. If I try and do layers of wood grain to build up slight lines, I’m not precise enough and wash out the underlying darker wood. argh! Need to improve precision painting skills.

Still have to paint add some highlights and shadows on the green greatcoats, finish the faces, hair, flag, and a few minor doo-dads on the officer… then it’s on to a batch of warjacks.

So many models complete, so many to go! 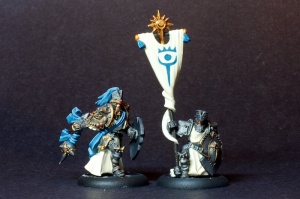 Precursor Knights completed! The eyes look a bit ‘big’ with the blue pupils, so I might go back and thin them down… or I might just varnish them up tomorrow and move on to the next model(s). The banner is airbrushed on with a frisket mask, and is the symbol of Morrowan (which is also sculpted into their shields, the figure at the top of the banner, etc).  In Iron Kingdom lore, these guys are religious zealots that follow the Morrowan faith, a splinter from the Menites which was the dominate religion. 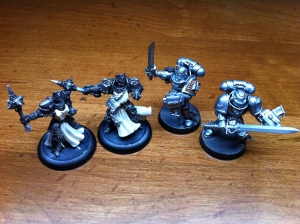 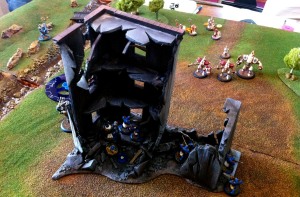 This past weekend I had some Warmachine firsts:

You can see the Cygnar hunter trying to flank on the left. This failed as the choir cast ‘Safe Passage’ on the Protectorate Revenger which sent my Hunter running back towards the front line.

This did seem to cause the Protectorate advance to hesitate, and my warcaster (Siege Brisbane) laid down several turns of 2x/turn Rocket Cannon ranged attacks (thanks to Reinholdt’s reload special action)  that successfully softened up the Protectorate Advance. My Hammersmith (which is hard to see, is around the corner of the building on the left) disabled (but didn’t kill) the Revenger and soaked up the attention of the Protectorate Crusader and Revenger. The Protectorate Repenter rolled poorly on a flame thrower spray attack and only took out one of my stormblades as they advanced out of cover, who were then in position to successfully attack Kreoss with a combined melee attack which effectively ended the game. 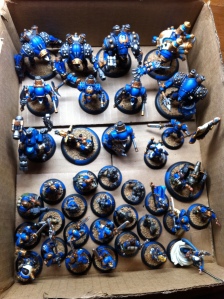 Glued sand down to 37 Cygnar tonight… tomorrow night will be painting sand!! w00t! 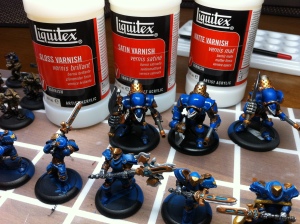 As I need to varnish/seal an entire cygnar army… I’m trying various finishing techniques and I think I’ve found the best. I applied un-thinned liquitex gloss varnish first, and you can see the very glossy finish on the hunters in the picture to the right.

The varnish feels very durable, handling the mini feels like a harder/more durable surface than the ‘raw’ acrylics, without being really apparent when looking. It also feels like there was never even a remote risk of frosting like with the aerosol cans. 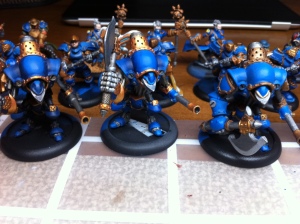 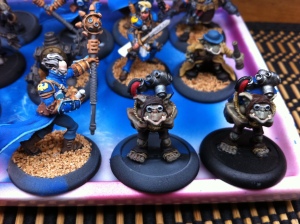 I sealed 15 miniatures yesterday with Games Workshop Purity Seal. While it went on clear, after about 20 minutes I got moderate frosting. You can see it clearly on the bases between the two bodgers. Fortunately,the figures I painted look OK a bit ‘dusty’ but this would be unacceptable on my entire army!

After some research I made two mistakes.

UPDATE:
I applied a single coat of Krylon UV-Resistant Clear Matte Acrylic Coating over the frosted Games Workshop Purity Seal and it ‘erased’ the frosting experienced with the purity seal. While I can’t vouch for the durability of the krylon matte acrylic coating, it didn’t frost. Temp in the garage is roughly 65 degrees Fahrenheit and 67% relative humidity. Below the Bodger on the left has one coat of ‘frosted’ purity seal and one coat of the Krylon coating. The Bodger on the right has no varnish or finish of any kind. I think the more reddish hue of the bodger on the left was proably just a stronger Reaper ‘flesh’ wash and has nothing to do with the finish. 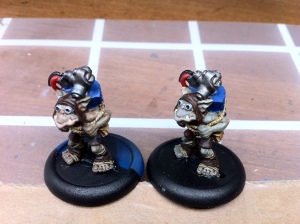 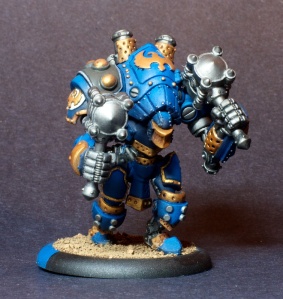 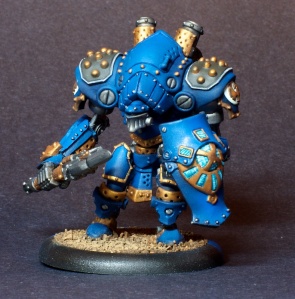 Airbrush base color and highlights 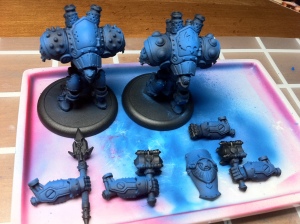 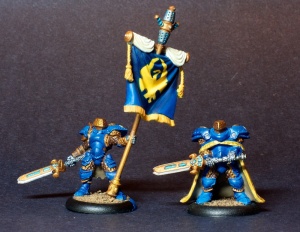 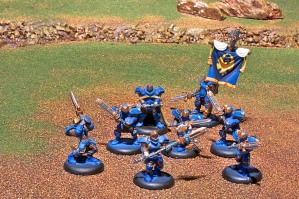 I’m pretty happy with the unit. I used frisket film and an airbrush on the banner to get the cygnar symbol…which turned out pretty good. I’m not happy with the gold trim on the officers cloak… generally not in love with that model as I don’t have the skill to make it ‘pop’ in any interesting way.

I really need to get my lighting optimized so I have whiter light and less shadows. Anyhow, I ‘finished’ my StormBlades (all my units are going to be based together at the end for consistency). Carrying them up the stairs to be photographed on the terrain board, the very top-heavy standard bearer and unit leader decided to jump. The standard bent back (more or less) to straight, but the unit leader’s blade was so tweaked it broke when I straightened it, so I had to break it off, file it straight, pin it, glue it, and then add some green stuff to reinforce. I’ll paint the greens stuff tomorrow after testing the strength.

This makes 67 models painted and 51 to go. Going to airbrush base-color and highlight the Centurion and Hammersmith tomorrow night. 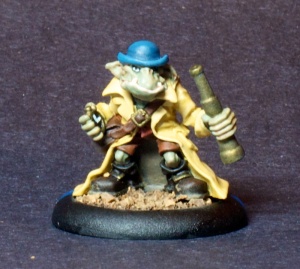 59 Models Complete, Half Way There! 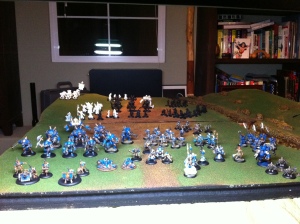 Finished Reinholdt, Gobber Speculator tonight. That makes 59 models painted, and 59 models to go. Half way there!

Of the remaining 59 models there are:

I just decided I’m going to paint the Stormblade Unit next, followed by the Centurion & Hammersmith Warjacks. 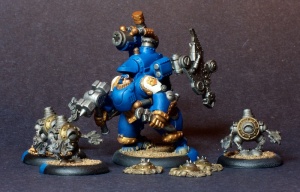 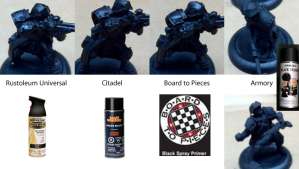 Trying out four major brands of primer on Warmachine trenchers

I ran out of the same pose so the armory primer is on a different pose. I was applied using the same technique, just minutes apart. The armory finish was very dull and obscured more detail than the other three. It was different enough that I painted a second model after shaking the can for an extra few minutes to ensure it wasn’t a paint temperature/mix issue.

While I’ve since purchased a airbrush and basecoat my models with ‘Creatix Wicked Detail Color,’ if/when I use spray paint, I’d recommend Rustoleum Universal, GW, & Board to Pieces equally, and I would advise against Armory. 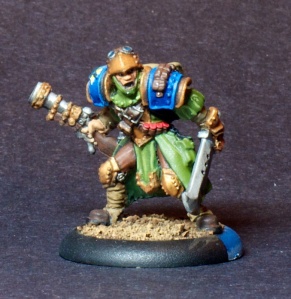 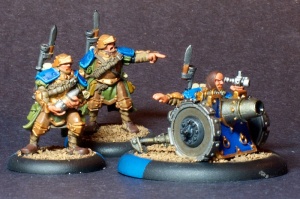 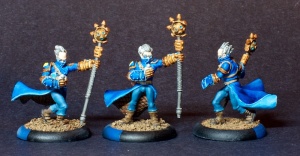 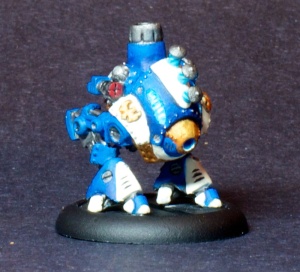