Had a fun throw-down with a good friend… I played my as yet unfinished Imperial Guard army, he played my Blood Angels army.

I’m still learning the rules so there was lots of looking things up… battle too probably 4-5 hours total. I think we hit 90% of the rules though (still haven’t done anything Psychic and no monstrous creatures, but covered pretty much everything else).

I fielded my recently purchased, beautiful Ork army against my buddy playing my blood angels. Because I don’t get to play much the game was mostly learning the rules… but I had a great time! The Orks definitely have LOTS of dakka… but the list I brought mostly maxed at strength 6 & 7, which couldn’t touch the land raider or the dreadnoughts.  The deff rolla’s show promise though, now that I know how to use them! (D6 S10 attacks is nothing to sneeze at!). 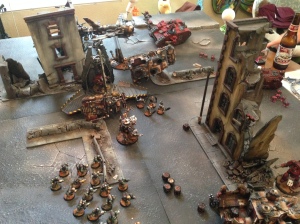 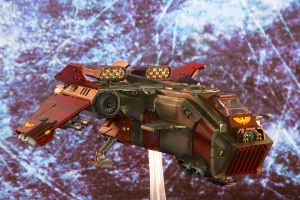 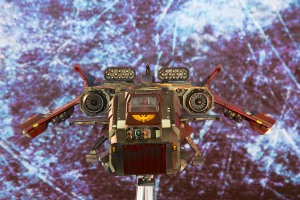 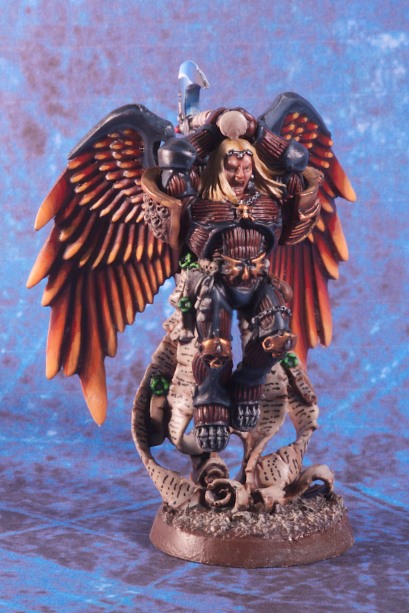 END_OF_DOCUMENT_TOKEN_TO_BE_REPLACED

Magnetizing the arms of the Warhound Titan

Below are the steps I took to magnetize the arms of my Warhound Titans. 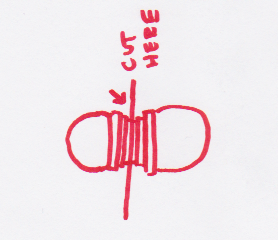 This is where I chose to magnetize the arms.

END_OF_DOCUMENT_TOKEN_TO_BE_REPLACED

20 pics of the warhound titans ‘Saevus Rex’ and ‘Saevus Juris’ along with their reaver ‘Saevus Verum’ – of the Legio Invictus.

END_OF_DOCUMENT_TOKEN_TO_BE_REPLACED 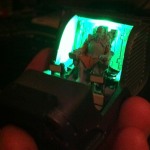 A quick preview / work in progress pics of the pair of Forgeworld mars pattern warhound titans I’m currently building. I just finished the modular/LiPo/switched LED setup. Next is to finish detailing the cockpit and then epoxying the heads to the chassis.

END_OF_DOCUMENT_TOKEN_TO_BE_REPLACED

Wow, I won ‘best painted’ in the latest league at ATEase Games in Poway, CA with 1500 points of my blood angels army!!!

My army is on top of the dark grey foam on the right side of the picture in the middle.

There were some REALLY NICE armies on the table… Some great looking Necrons, Tyrranids, & Grey Knights in particular. 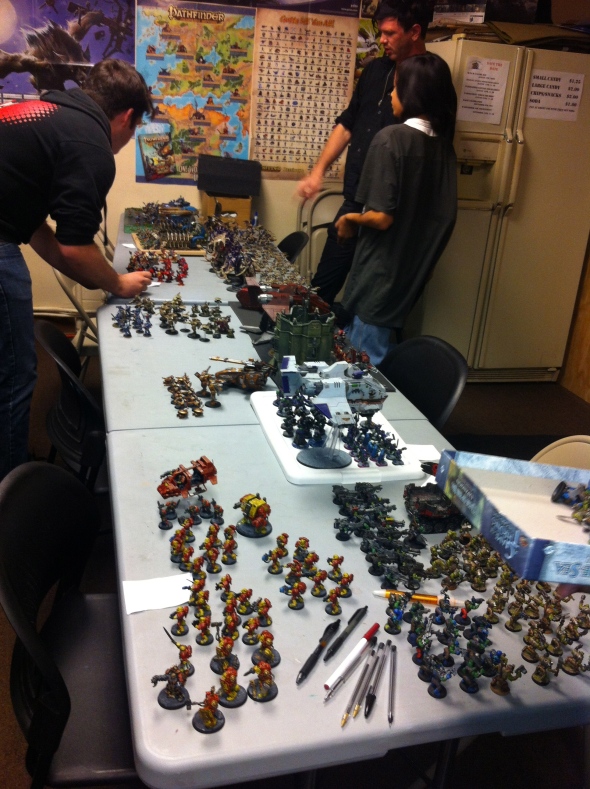 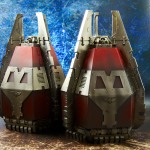 I just finished airbrushing the atmospheric ‘burn’ on the two ForgeWorld Lucius Pattern Dreadnought Drop Pods tonight. It’s difficult to tell from the picture because the standard drop pod isn’t there for size reference…but they are huge!

Excuses: I didn’t have a large enough back-drop to show one closed and one expanded like i’d like…and just moved my little light-box photo studio and don’t have the lighting like I like it yet… so I’m not supra happy with the pictures but am very happy with the models themselves. 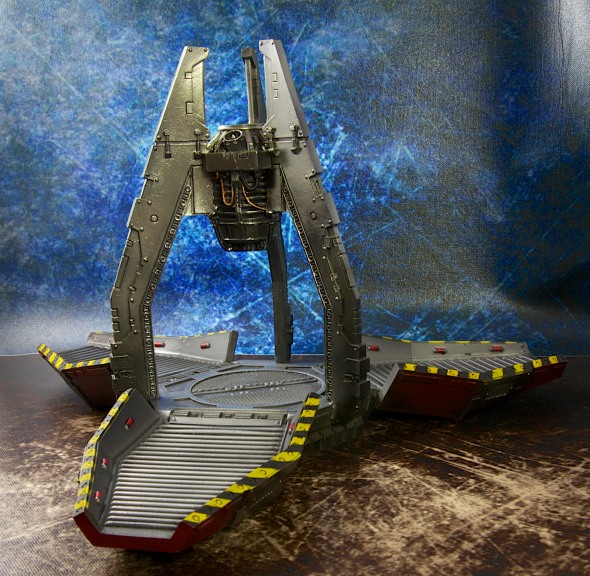 And I (sort of) fielded the reaver titan Saevus Verum!!!

While my 1500 points of blood angels faired poorly… Mostly do some very effective Dark Eldar (Allen!) dropping in on my flank and punching lots of painful, nasty holes in my army in the first two turns… my Reaver Titan walked the battlefield!! W00t!!!

Our tournament organizer, Josh, controlled the Reaver at the end of each turn (after all other 8+ players resolved their player turns). It was fun putting the apoc barrage template down… while it did do lots of damage, the dice rolls definitely still matter and many of the troops/squads targeted were remarkably resilient to the apocalypse missile launcher.

On the bottom of turn 4 or 5 (I’m not sure as I was tabled at the bottom of 3), Saevus Verum was finally reduced to 0 hull points and Josh rolled a ‘6’ on the catastrophic damage table… BOOOM!!! reactor meltdown = 6xD6 strength ‘D’ AP2 hit. This was especially brutal on the two blood angels players who had lots of troops near the Titan (I feel slightly bad, but what a great narrative!!!).

In any case, I had a great time… even won the ‘best sportsman’ league award. Everyone at the shop has been really frikken cool…and patient with me as I learn the rules. I’m really enjoying the ‘gaming’ side of 40k… only problem now is that my painting isn’t going as fast! :)

Folks measuring out…24″ (if I remember correctly) from the Titan to see who got hit by the reactor meltdown.

Had a lot of fun playing Mike and Jay. Lost the line breaker and kill the warlord objectives, but took ‘first blood’ tertiary.

Have to think what I’d do differently… wasn’t that close and I should be doing better. 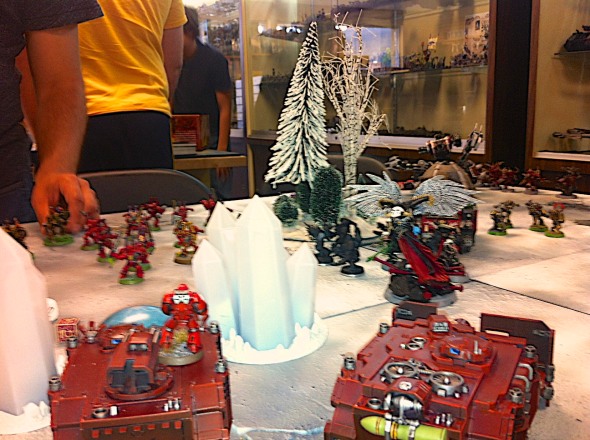 HUGE game. 3 players with 2k points each (Me, Jim, Mark) against a single Tyranid player (Josh) running approx. 4k of ‘nids. Josh looks to be the best w40k player at At Ease Games… he knows almost all model stats by memory, is super fast at gaming (hard for me to keep up), but a really great player/opponent. I had tons of fun! We ran out of time (the store closes at turn 11)… my 2k points were essentially tabled (killed) by what I think was the top of turn 4. The ‘nids went after my three assault squads first, neutralized them, then knocked them out. Josh definitely knows what he’s doing.

I demo’ed warhammer 40k with a friend from work (Mr. A). I was 0/3 playing him in WarmaHordes, now I’m 0/4 across two different game systems!

We played 1 HQ, 2 troops, 1 elite, and 1 dedicated transport (razorback) each. The game went about 3 hours… but in me ‘teaching’ the game I actually learned quite a lot. I enjoyed the game, and so did Mr. A., but not enough to hook him into painting up an entire army.

Oh… and Sanguinar can’t hurt a contempt or pattern dreadnought. :/

Finally finished up a land raider redeemer today. Of course photographed with a macro lens I see all kinds of things I want to change. :/

I had primed it and painted the base red shade months ago… and in the time it had set the front doors ‘froze’ in place. When I forced the door open the plastic hinge actually twisted off. So… I had to drill it out and replace it with a brass rod. Unfortunately, it doesn’t completely close now.

I also switched to a different color scheme for the forgeworld land raider doors… went to ‘black’ wings and I’m really happy with how they turned out. I could do more work on the comms relay metallic, the ‘burn metal’ on the flamer sponsors… Generally I’m happy with it and will move on to my next projects (2x Lucius pattern drop pods, a whirlwind, assault terminators, 2x Warmachine Hunters, Astorath the grim…ug, have too many projects going on right now!)

The game lasted a solid 4 hours (4k points is a lot of action!) and we tied on primary (control a center objective) and secondary (messenger) but won on kill points (tertiary).

Anyhow, having fun playing the game! 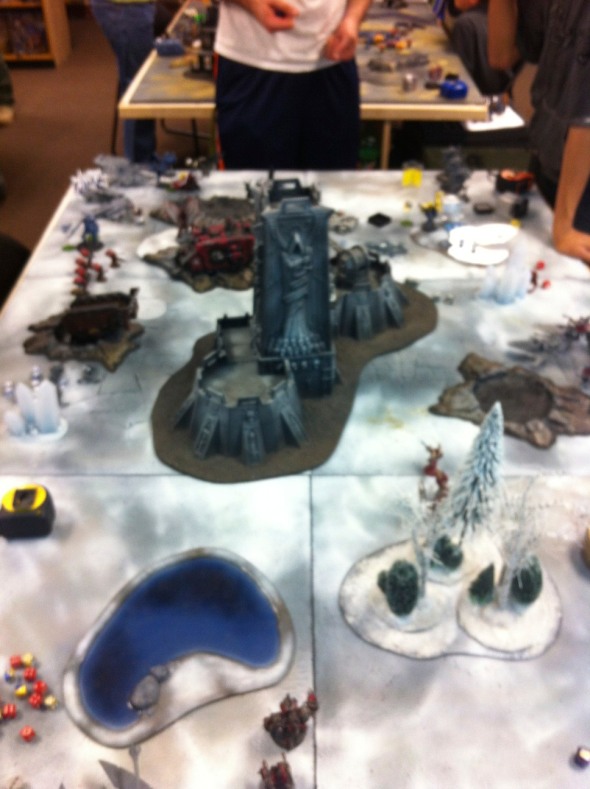 My parter was a Tau player, Will. Opponents were Mark (Eldar) & Mike (Chaos Space Marines).

We lost the roll to decide who chooses deployment order, our opponents went first. It was interesting… we rolled off TWICE with both sides rolling snake eyes, finally on the third roll of there was another 1 (us) and a 5 (them).

We got hit HARD with an alpha strike. I lost my vindicator and my dreadnought at the very top of turn 1… which meant that 15% of my army didn’t do anything before dying. I also choose to deep strike my two assault squads… so there weren’t a lot of models on the table in turn 1 which meant we soaked up a bunch of pain right off the bat.

Time to rethink my list, moving away from a DOA strategy… maybe mechanized assault.

I run this model as a regular Sanguinary Priest, as Brother Corbulo can’t buy the jump pack upgrade. However, the jump pack is magnetized so when I get around to painting the apothecary pack that comes with the model I can run Corbulo as well.